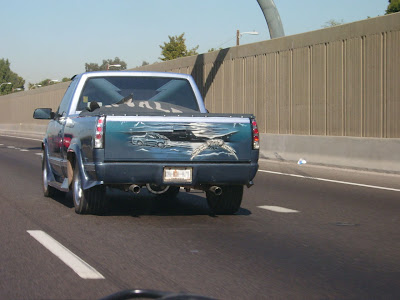 It’s got to be the most ridiculous trend yet.

Of course, the other tasteless stuff is still there, like the clear tail lights, the running boards, the roll pan that makes no sense with the ground effects, the uneven exhaust, the torn canvas tonneau cover with something written on it for people to see with google earth, the chrome diff cover, and the lightning bolt rear window tint.What really sets it off though, is that little mural on the back. It’s not just a painting of his truck back there, it’s his truck in the middle of a fucking situation. Notice how gracefully his truck streaks through the water in reverse, away from the giant flying snow crab during the storm at the end of the world with the part of space coming down to earth. Breathtaking.Also noteworthy is the fact that on the painting of his truck, he clearly has some sort of plastic fairing behind the cab, while his real-life truck does not. Is this a tribute to a previous modification, or a sign of things to come? 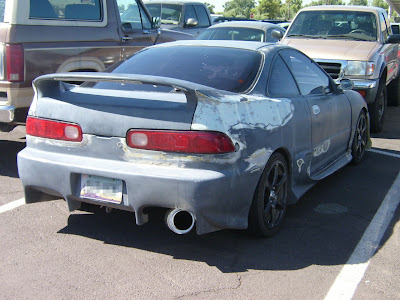 But body kits that make your car look like a flying carpet, well, those are just totally fucking awesome.

Hello, and welcome to Tasteless Arizona! We will be doing our best to bring you the finest examples of bad planning, piss poor judgement, limited mechanical skills, and just plain shitty taste.

Until then, hang tight… 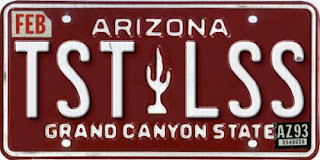 Can't remember the last time I saw one of these la

Spotted this right-hand drive Miata on my drive ho

Saw this Volvo Amazon while filling up the other d

Whatever happens, this guy is going to be ready fo

Spotted my first ever Ford Bronco in the wild the

Pontiac Fiero up on the lift. Been a while since I

Had a close encounter with “Der Hammer” a yell

Did you catch this 1985 Isuzu Impulse at Barrett-J

First spot of the Mercedes EQS 450+ in the wild. M